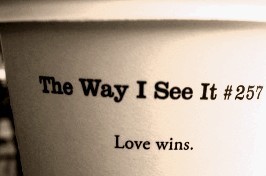 The recent SCOTUS ruling that made same-sex marriage legal in the United States of America was met with a flurry of rainbow-themed avatars and #LoveWins hashtags. There was also a proliferation of warnings of apocalyptic destruction and the empire’s downfall from others. These two messages filled the air waves and polarized people in two camps. Social media was quick to highlight the tension between these two camps. Messages of love, hate, compassion, and confusion intermingled with one another forming an amorphous blob of simplistic explanations and pithy aphorisms.

There were many Christians who went out of their way to define and describe what love is. Some even reminded their audience of Jesus’ unconditional love for them. However, this was also coupled with a fairly lengthy caveat of sorts that turns into more like a disclaimer notice one would find in most contracts. I think it’s very important to make sure that we communicate what we truly mean. I would say that’s a basic given in trying to communicate with others. Yet, I feel like if you have to explain what unconditional love is by adding so many conditions to it, then it fails to be unconditional love anymore. If you have a son who is a drug addict, would telling him “I love you” mean that you are condoning or endorsing drug behaviour? No. If you have a daughter who got pregnant out of wedlock, would telling her “I love you” mean that you are condoning or endorsing sex outside of marriage? No. It means that even though they may have committed actions that you do not condone or endorse, you are not going to withhold or refuse to offer them your love. Displaying unconditional love means that our expression of love for another person is not based on what they have done but based on who they are.

In the Scriptures, we constantly see Jesus interacting with the marginalized and the oppressed. They were the bad people that society says we should never associate with: prostitutes, tax collectors, and cheaters. There is something startling in the way that Jesus dealt with those on the fringes of society. What startles me is not what Jesus said, but what he didn’t say. He never utters a single word of condemnation or what could even be interpreted as a “loving sermon.” He treats them with kindness, dignity, and dare I say it… love… that is so shockingly simple. This was not a love that needed lengthy explanations. This was a love that was simple and clear. It needed no further ramblings on what it meant. It was given purely. It was received purely. And it had the ability to transform their lives in ways that verges on the unfathomable.

When unconditional love is given, no words can properly define it. Why? Because unconditional love is intensely experiential. It arouses feelings within that we didn’t even know existed before. It is an incredible experience that defies logic. It may be difficult to put into words but it also unbelievably clear. There is no confusion in it. There are no doubts. Only clarity.

If we, as Christians, truly have this type of unconditional love for homosexuals as we often say we do, I’m pretty sure we wouldn’t have to go to great lengths to give them a detailed explanation because they would know what it means. The fact that we do makes me stop and pause for a minute and wonder if this is actually true.

Maybe it is best if we just said this: I love you. Period.